TECO offers electrical service to the Rocky Point communities, and underground services were installed at the time of construction throughout Pelican Island, the Cove at Rocky Point, and along Venetian Way in Dana Shores. A significant initiative is underway aimed at  converting many of the remaining overhead distribution facilities within Dana Shores and along Dana Shores Drive to underground power.

The County has voted to support long-term financing options to help homeowners fund the cost of burying utilities from pole to pole. The cost of connecting underground power from the right-of-way to a specific home is separate and will be born directly by the applicable homeowner. Most homeowners will wait until we are closer to undergrounding their specific street to run power from the poles to their homes. But if you are having work done on your home in the meantime, this could be an opportune time to prepare for this changeover or, in some cases, to even go ahead and run underground power from the street to your home.  Here are some thoughts to consider.

Replacing or Installing a New Meter Box? The following is a list of meter boxes approved in our service area. It also shows which boxes are approved for underground service.

Upgrading or Installing a New Electric Panel? To support underground power, install at least one electric panel with a 200-amp capacity rating or higher and both bottom and top ports.

Installing a New Driveway or Pavers? TECO intends to directional bore under all existing driveways whether concrete or paver. Compared to open-trenching techniques, directional boring causes minimal disruption to the surrounding property. Still, it is better to wait until construction is complete if possible. If that’s not an option, some people may choose to install the TECO conduit ahead of time, especially homeowners whose yards and driveways may be torn up due to other projects.

TECO can issue the conduit to your contractor for installation. The conduit will need to be installed to TECO’s specifications and inspected by a TECO Underground Inspector before the contractor covers it up with dirt. Conduit should be stubbed out on either side of the driveway about 10’ (especially on brick paver driveways) to help void any disturbance under the driveway when TECO digs down to perform the system tie in at a later date. Any of the conduit installed in the right of way requires at least 36″ of cover and any conduit installed on private property, which is normally service conduit, requires at least 24″ of cover. Additional specifications are provided in the attached documents. (One shows the conduit depth based on voltage (Trenching for Underground Cables Spec. 1-43). The second illustrates the typical placement of TECO facilities within Hillsborough County right of ways (Underground Layouts Typical of Hillsborough County Spec. 1-44).

Building a New Home or Undergoing a Major Renovation? New home construction and major renovation projects can provide a good opportunity for homeowners to get a head start on their conversion from overhead to underground service, especially if a neighbor already has underground from the right-of-way to their house.

If you would like to know more about the conversion between the right-of-way and your home, contact TECO’s One Source Department at 813.635.1500 and prompt for New Construction.  This group will generate a work request, which will be routed to a distribution design technician in our service area.

Caution: Regardless of the undergrounding project, if you currently have an electric panel that says FEDERAL PACIFIC ELECTRIC or STAB-LOK on it, we urge you consult with an electrician due to well-documented safety concerns associated with this equipment. These circuit breakers have been found in a number of Dana Shores homes. Because many of our homes were built around the same time with similar equipment, these same dangers could also be threatening your safety and home.

In 2014, the civic association received the following email from a neighbor, Paul DiBlasi of Americana Drive, about the hidden dangers he found lurking in his electrical panel. Paul hopes that sharing his story may help other Dana Shores residents avoid a potential disaster.

“I had my home inspected prior to purchasing it. Most items checked out okay. The inspector never alerted me to any concerns regarding my electrical panel, so I never really gave it much thought.

One year later, a technician working on my AC noticed a burned breaker. When I tried to purchase a replacement, I was informed that the manufacturer, Federal Pacific Electric, had gone out of business and was directed to a company that sold used breakers. I replaced the breaker and all seemed fine. 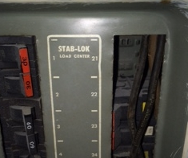 Another year later, I experienced some issues with that same breaker again. I spoke to a few electricians, and this time I was told more about Federal Pacific. I learned they went out of business because their breakers did not reliably trip in order to cut power to a failed circuit, exposing homes to a fire hazard. Online research supported what I was hearing. Test results from the Consumer Product Safety Commission showed the breakers have an unacceptably high rate of failure, and estimates indicate that 1 out of every 3 breakers is defective.

Federal Pacific Electric made a few different models. The worst one was the one I had installed in my home. It’s known as STAB-LOK. Houses built between the 1960s and 1980s may have these or other Federal Pacific breakers installed.

I thought I would pass this information along as my inspector didn’t seem know about this issue and there is a chance someone else doesn’t either. Please advise folks to do their own research. This is just a friendly notification from one homeowner trying to help another.”

We owe special thanks to Paul for sharing his story.